Orange and Its Twin 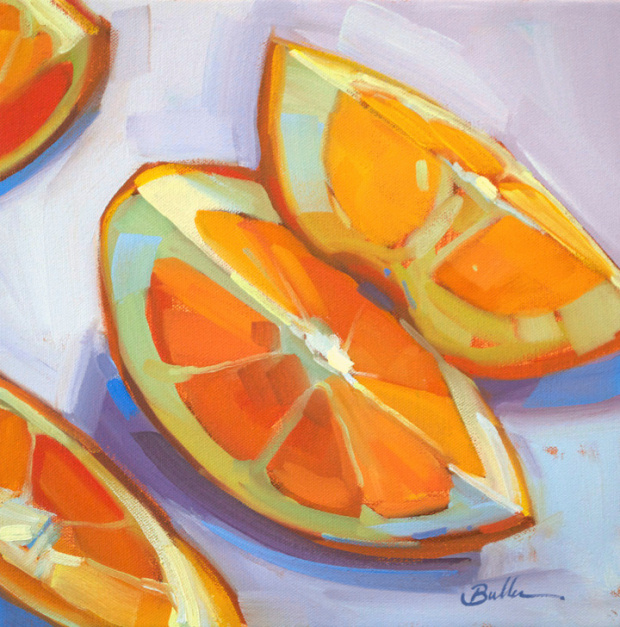 That morning I was sitting with my grandmother, watching her enjoy every bite of the orange she took, witnessing the soft warmth of sunshine caressing the wrinkles on her lovely face. There was that smile of contentment on her lips; without turning to me, she said, ‘Aaja ab santra cheel ke kha mere saath.‘ How could I not know that she knew I had been studying her?

I sat next to her, and started to peel an orange. When two joined orange slices came into my hand I just popped them in, ready to relish the twin burst of sweet citrusy juice, unaware of any repercussions. But when I looked at my grandmother she had a deep frown on her face, as though she would like nothing better than to just put her hand in my mouth and take those conjoined pieces of fruit out. She reprimanded me: one should not eat twin-pieces of anything, be it orange, banana, cherry or whatever, nothing adjoined! I got a good lecture for a few minutes but I brushed it off, saying, ‘So what? Twins ho jaye to sabse acha hai.’

But the frown only got deeper and she was pissed at me, and, unsurprisingly, my father happily agreed to this philosophy of hers, adding to my agony. Whatever the mother says is always right, even if one would like to go left.

I continued to pay no mind to adjoined pieces, and would still pop them in. Only now it was intentional.

Years later, when my father got the privilege of becoming a grandfather, he received the news that I was expecting twins. It was one of the best days of my life, as I had always wished for twins. But you can imagine his state of mind; for a while there was pin-drop silence. Unfortunately my grandmother wasn’t alive anymore to share his emotional turmoil, or she might have added, ‘Didn’t I tell you not to eat the adjoined pieces, and you wouldn’t listen? So many times I have said, whatever elders say is only for your best,’ in her Punjabi accent, which would sound even better and genuine.

What our elders say and teach us always comes in handy when we start to live our own lives, knowingly or unknowingly. They live by example. When I was a kid, I always looked up to them and listen to them. Well! most of the time I would not; as I grew up I developed opinions of my own, and of course, somewhere gut feeling plays a huge role, where one thinks, let’s just do it, we’ll see what happens. I fall in this category, but what has stayed with me nonetheless are the ethics that my family taught me, along with the sense of belongingness.

My twins are going to be 7 this year. How time flew by, I have no idea, but I have enjoyed each and every moment with them. And it’s getting better! We play games, make up stories, talk a lot, fight, and make sure there’s always enough joy to go around. We have our meals together and sometimes we share, but most of the time we steal from each other’s plate in good fun. The other day, we were lounging around and chatting and eating oranges, and then one of the twins picked up two joined slices of an orange…

Lovely juicy story Sam.. as sweet as you and your twins

Samridhi , Your cherished memories nicely narrated . While I was going through this episode with your daadi ma, I was wondering what could be st back of her mind when she wanted you to separate each piece and rnjoy the juice rather than gulping the double together. Each of the piece as in case of both children who came to this world together, have their individuality. They can’t be bracketed together as they have their own likes and they therefore have different personality. Just as you ought to enjoy each piece of fruit separately to get full pleasure ,… Read more »

Very well written Sam and I can so relate to this. I remember gobbling an orange slice with a peel once… Incidentally, the only repercussion was I couldn’t taste anything for a few hours. Strangely, nothing else!